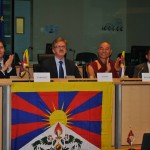 Anniversary meeting in Bruxelles: On February 19th, Thomas Mann lead the 100th meeting of the Tibet Intergroup of the European Parliament with more than 120 participants. For 25 years now, members of the European Parliament engage in the rights of Tibetans, their culture, language, religion and identity. With resolutions and debates, conversations with the EU-Commission and exhibitions they already achieved a lot. Huge conferences in Bruxelles and Strasbourg with prominent guests like the Dalai Lama, representatives of the Tibetan Exile-Government and experts from all over the world were organized. Today, the honored guests were Kelsang Gyaltsen (special ambassador of the Dalai Lama in Europa) and Matteo Mecacci (president of the International Campaign for Tibet).